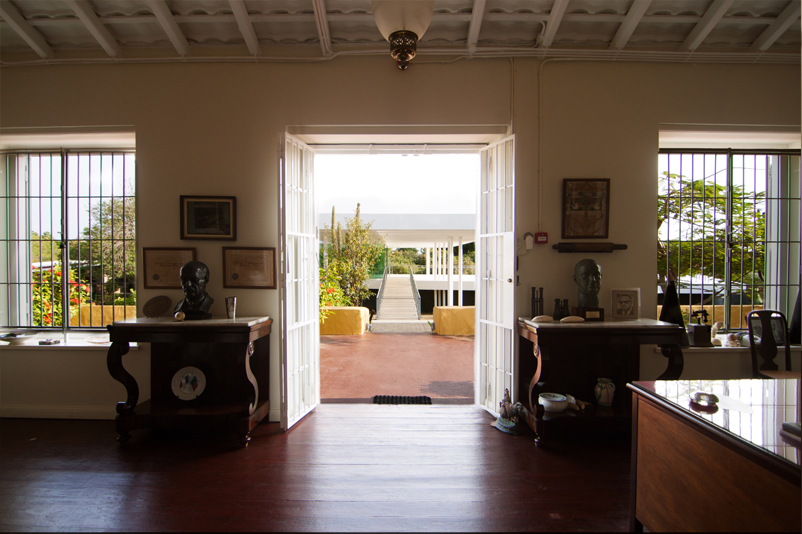 The two pier-tabels on either side of the entrance to the front gallery or "Adrei Dilanti", are made of dark mahogany with a white marble top and a straight apron. The bottom shelf is rectangular with two ear-shaped extensions, supported by the two S-shaped legs.

Those who bend down to look underneath the top, will find a lock that indicates the existence of a drawer. But however close you look, you cannot see which part is supposed to slide open. Both pier-tables have this secret drawer. Unfortunately the keys are lost, so it is not possible to demonstrate the secret drawers.
The pier-tables were made at the end of the 19th century and have been in the Maduro-family ever since. Mrs. E. Dankmeijer-Maduro still remembers her father keeping important papers in the hidden drawers.

A mahogany pillared cabinet with four doors at the front, all of which are cut from the same piece of wood. Each door has a locally made silver escutcheon (boca yabi), representing a leaf with part of the branch and a dove on top.
The pillars are free-standing and diagonally placed at the corners. They have a twisted turning and ornaments with bulbous diamond carvings. The feet of the wardrobe are urn shaped.
On each side there is an extra door covering the entire height, also with a silver escutcheon.
The cabinet has been made during the first half of the century and was - according to an inventory made shortly after the death of Elias Curiel, father-in-law of Salomon Elias Levy Maduro in April 1847, the family for more than 150 years.