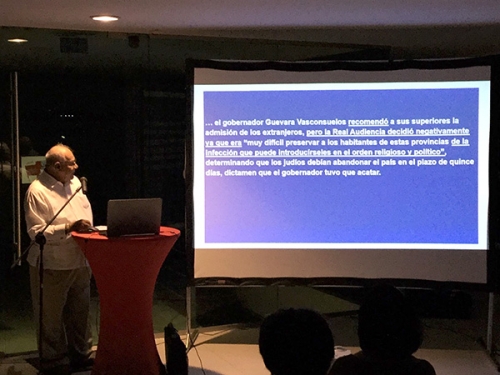 On the evening of October 4th a very interesting lecture was held at the Mongui Maduro Library. The subject matter “The history of the settlement of Curacao Jews in Venezuela” is a topic not many people are familiar with. The lecturer, amateur historian Mr. Hubert A. Cabaña, spent many hours at the Mongui Maduro Library studying economic, social and geopolitical aspects of the settlement of Jews from Curacao in Venezuela throughout the centuries and collected lots of information. Fortunately Mr. Cabaña was able to present the result of his studies in a nutshell to the captive audience. He explained that the Jewish merchants from Curacao who were striving to expand their trade relations to Coro met with a lot of resistance not only from the Venezuelan Catholic Church which kept persecuting the Curacao Jews even after the Spanish inquisition was abolished but also from Venezuelan merchants who viewed the merchants as fierce competitors. Since the Curacao Jews were Dutch citizens the Royal House of the Netherlands tried its best to protect them. In 1855 the Dutch King William I even had to sent war ships to Coro to save Curacao Jews from Venezuelan pogroms. The lecture was well received by the audience and several members of the public were still left with a lot of questions. The collection of the Mongui Maduro Library is available on a day to day basis for those who would like to research this topic and other subject matter related to the history of the Curacao Jews and social and cultural history of our island. The next Mongui Maduro Library lecture is planned for the 2nd half of January 2019. 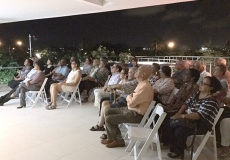